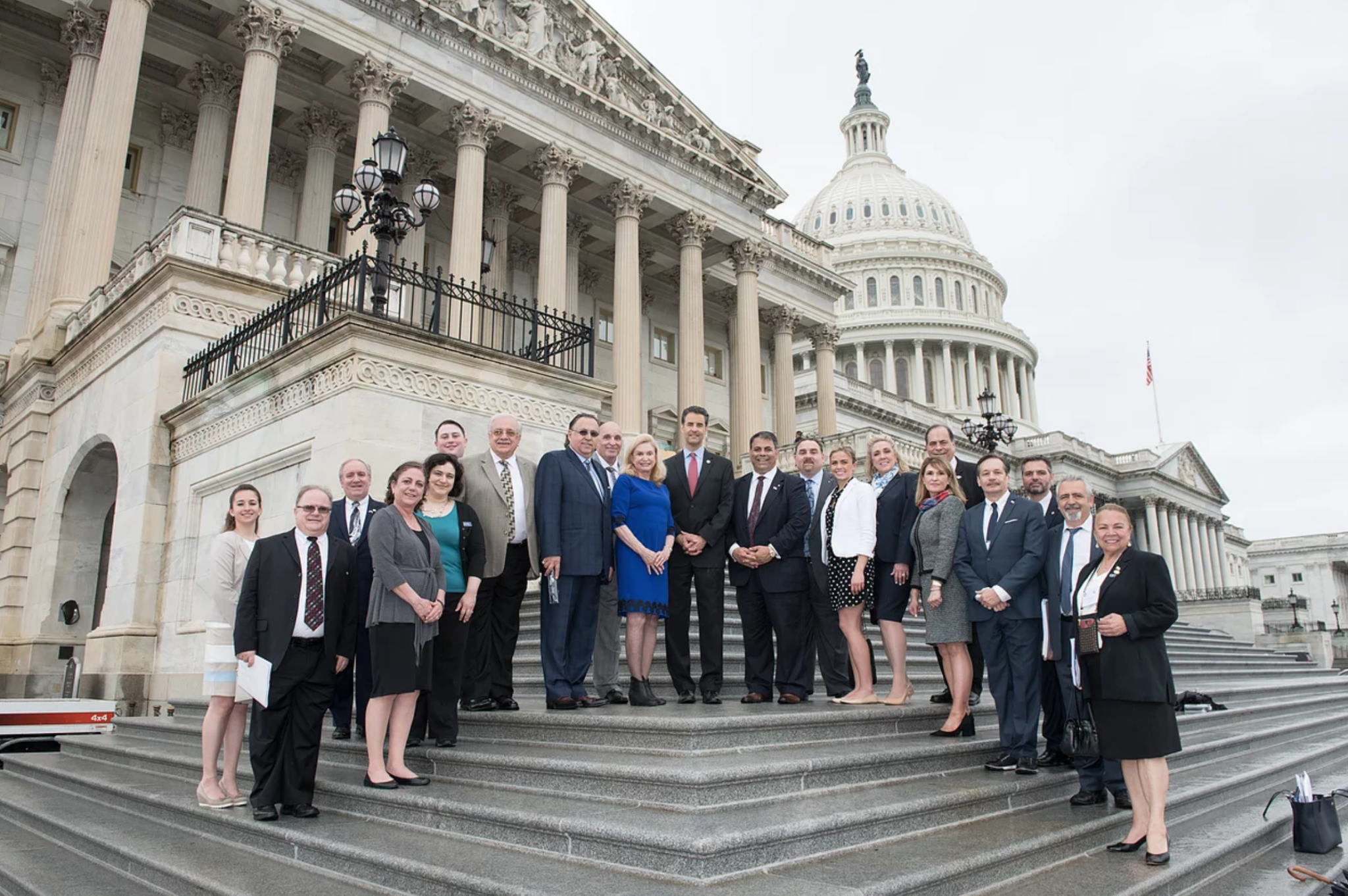 WASHINGTON, DC—The American Hellenic Educational Progressive Association (AHEPA), the leading membership-based association for the nation’s millions American citizens of Greek heritage and Philhellenes, and its affiliated women’s organization, the Daughters of Penelope, brought their public policy priorities to the attention of congressional legislators and their staffs during their annual Capitol Hill Day, May 16, 2018. The AHEPA Family’s Capitol Hill Day has become an annual event since 2006.

“Our mission guides our public policy priorities,” Supreme President Carl R. Hollister said. “As such, we have a diverse set of legislative interests, both foreign and domestic, that reflect our programs and initiatives that serve our mission and community.”

He added, “We sincerely thank all our volunteer members who unselfishly took the time out of their busy schedules to fulfill their commitment to civic responsibility. We had representation stretching from the Southwest and Midwest, and of course, New England and mid-Atlantic regions. The diverse geographic composition of our grassroots is our strength, and it is crucial that we bring it to Capitol Hill to convey a strong message in support of our policy priorities.”

According to Hollister, AHEPA family members who participated at the

organization’s annual Capitol Hill Day discussed issues that included: Greece’s importance to United States defense and security interests in Europe and the importance of strong U.S. – Greece relations; religious freedom for the Ecumenical Patriarchate, justice for Cyprus and Cyprus’s sovereign right to explore for energy reserves, and ensuring cost-effective, job creating, and lifesaving domestic programs are preserved and maintained in the federal budget. Domestic programs of interest to the AHEPA family include: affordable housing for the elderly, medical research at NIH, and domestic violence. In addition, the participants’ objective was to help to grow the Congressional Caucus on Hellenic Issues as well as other congressional caucuses of interest.

“Our aim is to grow the Congressional Caucus on Hellenic Issues, helping it to return to the record-setting number we achieved in previous congresses,” Hollister said. “We are encouraged by the positive responses we received by members of Congress, and their staffs, who are not members of the Caucus, to join it.”

The day’s events included a morning reception where the AHEPA family received remarks from U.S. Rep. Gus Bilirakis (R-FL), co-chair of the Hellenic Caucus and Congressional Hellenic-Israel Alliance; and the U.S. Rep. Charlie Crist (D-FL). U.S. Rep. Carolyn Maloney (D-NY), co-founder and co-chair of the Hellenic Caucus, addressed the AHEPA family members during a group photo she helped to arrange on the U.S. Capitol steps. U.S. Rep. John Sarbanes (D-MD) also addressed the members who were gathered at the Capitol steps.

“We appreciate the strong show of support from the champions of Greek American issues and thank them for their participation, which helped to make the day a success,” Hollister said. “We pledge to garner support for their legislative initiatives and ask for the community’s help. We look forward to working with our champions to achieve all our shared policy goals and objectives before the 115th Congress comes to a conclusion this year.  There is not much time left.”

To conclude the day, AHEPA family members and friends gathered to honor excellence in public service at a reception held at the Capitol Visitors Center. The honorees, who were each awarded the 2018 AHEPA Pericles Award, were:

Supreme President Hollister and AHEPA Cyprus and Hellenic Affairs Chairman Savas Tsivicos presented the two awards. In addition to being staunch champions of the policy priorities of the American Hellenic community, both legislators were honored for being trailblazers in their own right. Congresswoman Ros-Lehtinen became the first Hispanic woman to serve in Congress in 1989, and Congresswoman Tsongas’s election marked the first time in 25 years that Massachusetts elected a woman to Congress.

In acceptance, the honorees commended AHEPA’s commitment to civic responsibility over its 95 years, and spoke to the ideals of democracy and public service that drove their desires to become public servants.

“They are the same ideals of humanity, freedom, and democracy that the ancient Greeks espoused so long ago.”