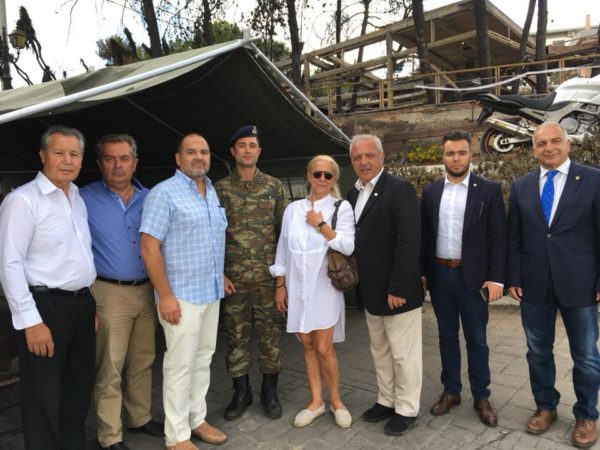 ATTICA, Greece — An AHEPA delegation led by Supreme President George E. Loucas visited eastern Attica, Greece, to survey the devastation in Mati and Rafina from July’s wildfires, and to meet with local officials and residents, September 6, 2018.  Prior to the visit to Attica, they met with U.S. Ambassador to Greece Geoffrey Pyatt and representatives of the Hellenic Fire Brigade, September 5, 2018.

The delegation met with Regional Governor of Attica Rena Dourou and Mayor of Rafina – Pikermi Evangelos Bournous.  The Ahepans received a briefing about the latest developments with recovery efforts in the region and where and what types of assistance still is needed.

Later in the day, the delegation surveyed the devastation in Rafina and Mati.  On a visit to Mati, they spoke with local businesswoman Maria Paptheou, who owned a taverna; and a lieutenant in the Hellenic Army responsible for the delivery of recovery services to the village.

“The firsthand experience of visiting Rafina and Mati proved to be overwhelming,” Supreme President Loucas said. “We appreciated the opportunity to learn more about the current situation from Regional Governor Dourou and Mayor Bournous, and we thank them for their time.”

According to Supreme President Loucas, the delegation gained a greater understanding about the conditions that cause wildfires, how they spread, and the challenges in fighting the fires from a meeting with the commander of the Hellenic Fire Brigade and his lead team.

“We conveyed our appreciation to the Hellenic Fire Brigade and commended the firefighters for their bravery,” Loucas said. “We also learned about the technology that is at the brigade’s disposal that help the firefighters in their mission and where resources could be enhanced.”

During a meeting with U.S. Ambassador Geoffrey Pyatt, Supreme President Loucas conveyed the American Hellenic community’s gratitude to the United States for its immediate response to Greece’s wildfires.

“We also explored with Ambassador Pyatt how emergency alert response technology can be implemented in Greece that can potentially help prevent future loss of life,” Loucas said. “We appreciated the ambassador’s time and for sharing his insights on the situation.”

Supreme President Loucas continues to urge AHEPA chapters to mobilize and raise funds toward providing assistance in the wake of the wildfires. (Donate here)