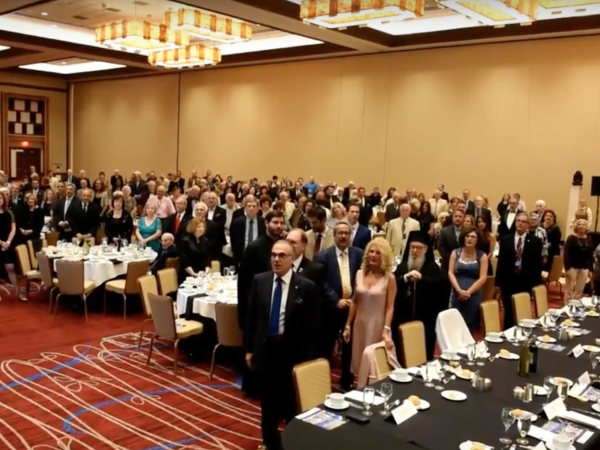 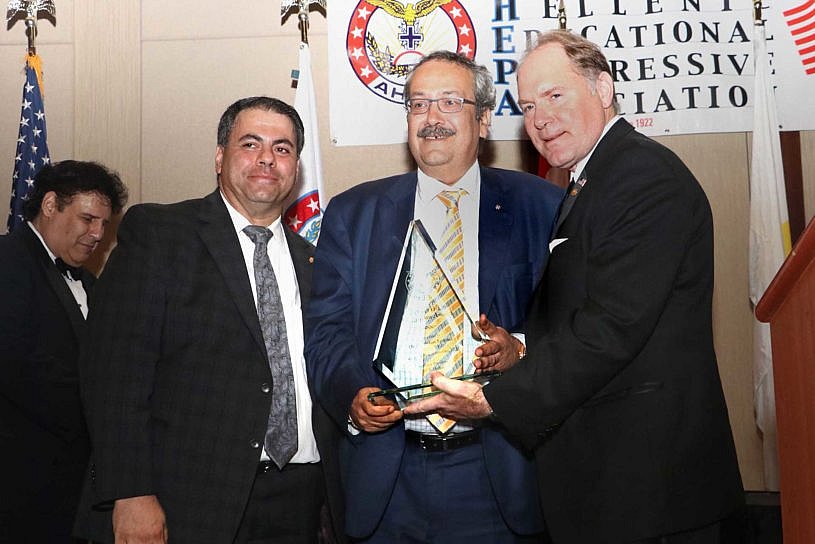 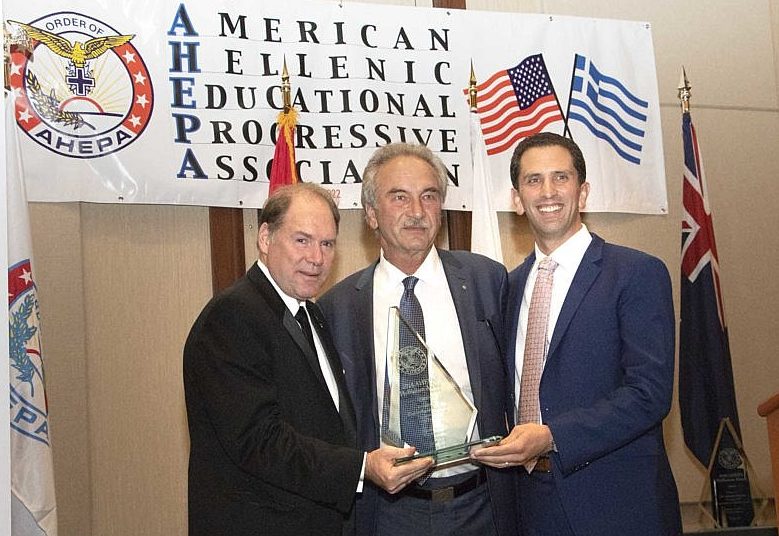 Two prominent Ahepans who are leaders in the community and within their respective professions were honored with the 2018 AHEPA Hellenism Award.  They were: Demosthenes Vasiliou, CEO/president, Astra Foods; and Dr. Spiro Spireas, founder, Sigmapharm Laboratories.

The honorees spoke with inspiration about the ideals and meaning of Hellenism and the importance of passing it on to future generations.  They also conveyed appreciation for AHEPA, its mission, and its work in the community.

John Vasilou introduced his father, Demosthenes, stating, “My father is the first in line of people who stand up for Greece and Hellenic ideals.” John called his father his hero and role model.

In acceptance, Demosthenes dedicated the honor to his family, and he conveyed his delight because the award is a recognition of all the great people he has worked with over the years.

“AHEPA continues to be, with our church, the leading voice of our Greek American community,” Vasiliou said. “It has stood the test of time and has remained true to its ideals and its mission.”

He added, “We are here today because we believe in those ideals and that mission.  We are here because our parents and ancestors believed in those ideals and the mission. They are the ones that reminded us, time after time, that we carry a very special cargo on our shoulders–Hellenism.  Never lose it, they said. And make sure you pass it along to your kids.  And share and give its fruits to this precious land they were lucky enough to come to and raise our families.”

Then-Supreme Treasurer George Horiates, Esq., introduced Dr. Spireas.  He described the honoree as a prominent member of the Omogenia with immense passion and a self-accomplished entrepreneur.  “We are the beneficiaries of your excellence,” Horiates said.

In acceptance, Dr. Spireas stated the award is “very dear to my heart because it is a Hellenism Award.”

“The word Hellenism moves me,” he said.  “It’s not Greece exactly; not Greeks exactly.  Hellenism is an idea. And idea of enlightenment and civilization; of love toward country and to live and die with freedom…Hellenism is doing the right thing, the philanthropy, without anyone wanting to know…Giving from the heart without wanting anyone to know is a great thing.  This is what builds civilizations.”

Dr. Spireas also noted AHEPA has achieved a lot in the spirit of Hellenism, and he also spoke admirably about philhellenes and the hard work ethic they have brought to the community.

Ahepan Basile Katsikis (Basile the Comedian) served as Master of Ceremonies in colorful fashion. Executive Director Basil N. Mossaidis provided greetings. The banquet program featured speakers who expressed their thanks to AHEPA for its assistance and effectiveness as an organization during its 96 years.

The audience received inspirational remarks from His Eminence Archbishop Demetrios, Geron of America, who conveyed the love and prayers of His All Holiness Ecumenical Patriarch Bartholomew I and shared greetings from His Eminence Metropolitan Evangelos of New Jersey. His Eminence also noted this is the 19th consecutive year he has joined the AHEPA family at its annual meeting.  In addition, His Eminence shared a moment with all AHEPA past supreme presidents and DOP past grand presidents in the audience, taking a photo with each group. 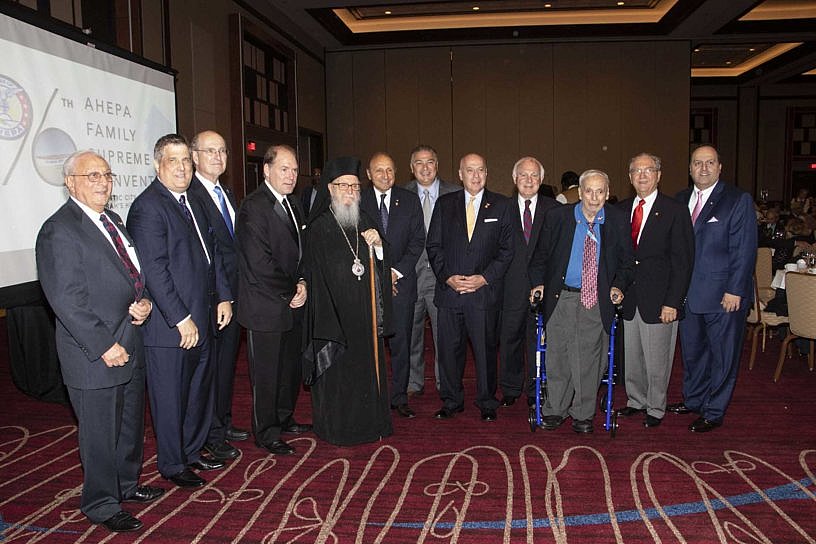 “You have saved a veteran’s life by giving him a service dog,” Bilirakis said, adding, “AHEPA is incredible…$50,000 for wildfires…always there for Hellenes and Philhellenes, and that’s what I love about the organization.”

Hollister remarked about the broad scope of AHEPA’s community service program and marveled at the difference they make in people’s lives.  He also spoke appreciatively about those who helped and supported him on his journey during the past year and all throughout his service in the Order. He also concluded, “We are one organization. We do real work. We accomplish real missions.”

Also, during the evening, the Pontian Society of Philadelphia entertained the audience with traditional dances with many individuals from the crowd joining in.

During the course of the evening, tens of thousands of dollars in grants or donations were announced by AHEPA family entities to worthy causes, including by Supreme President Carl Hollister. He presented Archbishop Demetrios and Saint Basil Academy Board President Evellyn Tsiadis with a $33,000 donation for a new furnace generator at the Academy.

AHEPA National Housing Corporation (ANHC) President Angelo Kostarides announced a series of grants, including a $15,000 donation to sponsor its first service dog for a veteran to be named, “Nick S.” in honor of two stalwarts of AHEPA’s Housing Program, former Chairman Emeritus Nick Stratas, who passed away in March; and Past Supreme President and former AHEPA Management Company President/CEO Nick Smyrnis. Kostarides also announced grants of $10,000 each to the Sons of Pericles and Maids of Athena, $2,000 to support the Daughters of Penelope “Salute to Women” program, and $60,000 to support The Ahepan.

In addition, then Maids of Athena Grand President Shakolas announced a series of donations: $13,000 to Saint Basil Academy, $6,000 to the Cyprus Children’s Fund; and $1,000 for Greece wildfires relief. 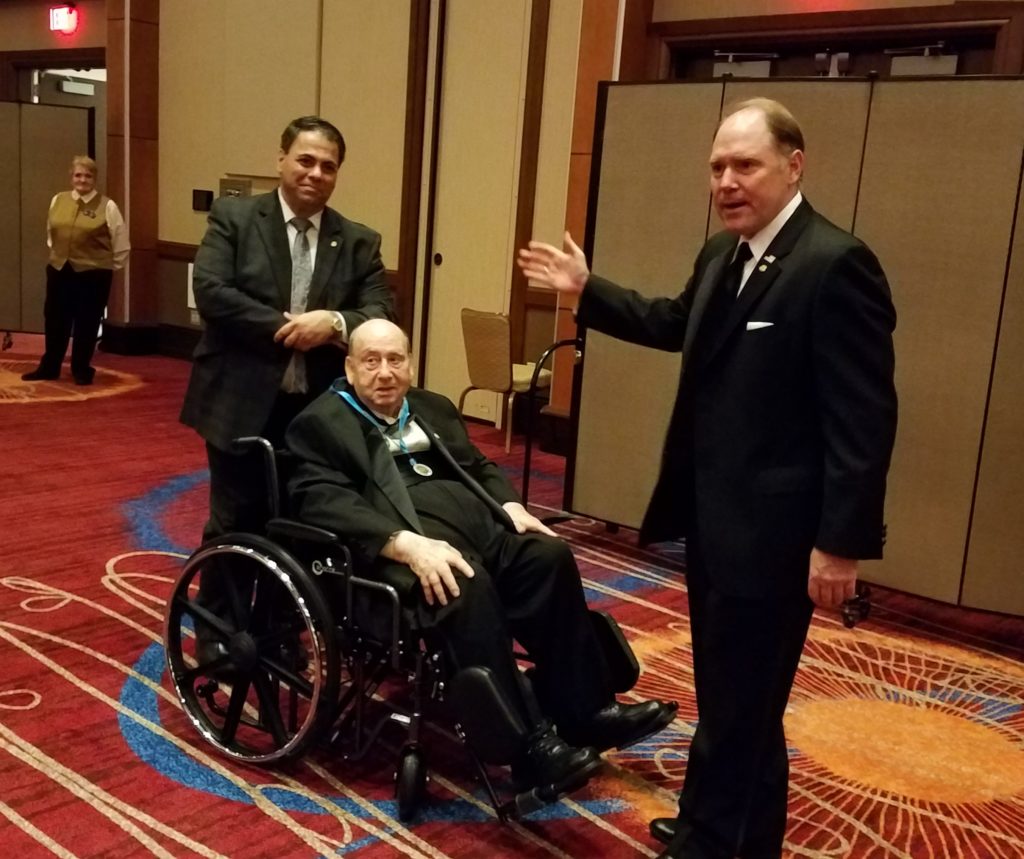 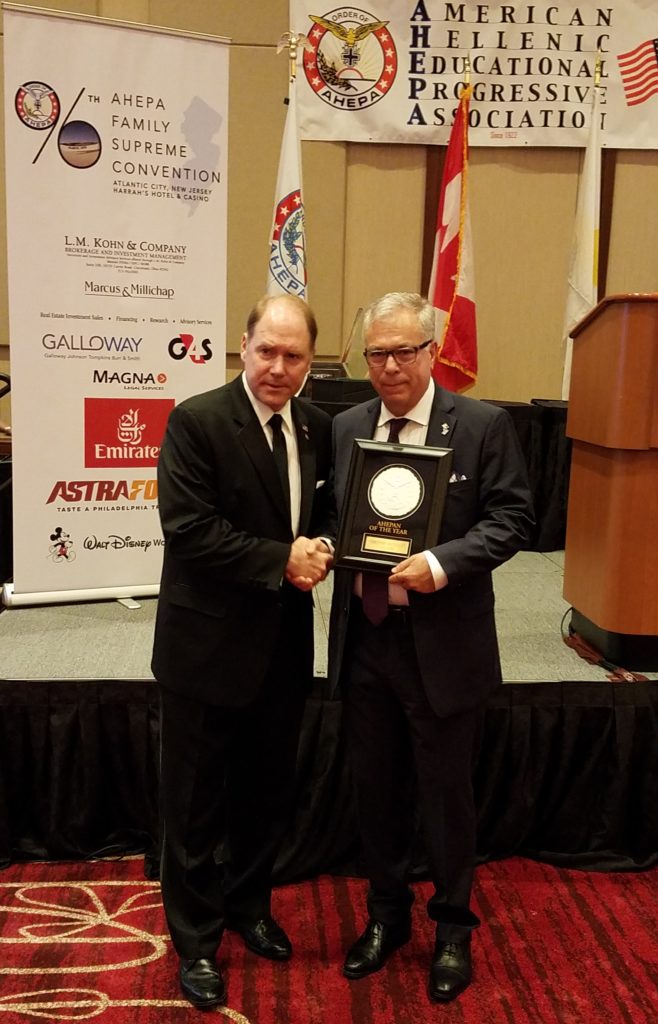