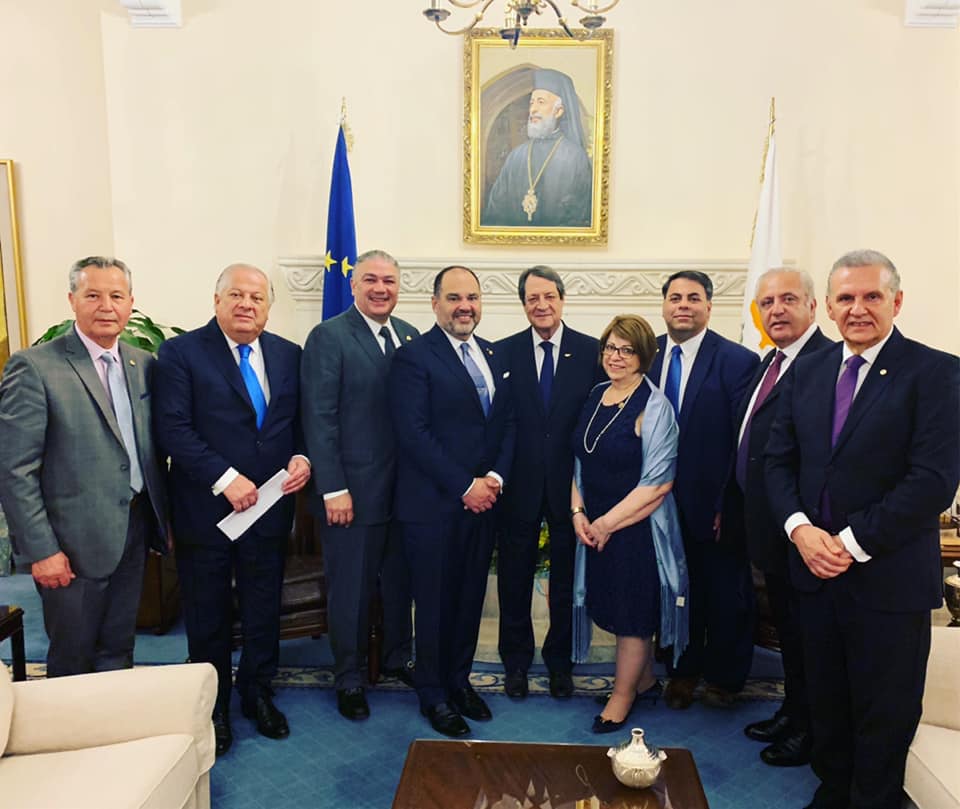 The 2019 AHEPA Family Leadership Excursion commenced with a visit to Cyprus, May 5 to 7, announced Supreme President George E. Loucas, who is leading the delegation on a three-country excursion.

The series of meetings in Nicosia with Republic of Cyprus and United States government officials focused on recent, alarming developments in the eastern Mediterranean (see AHEPA statement), enhanced U.S.-Republic of Cyprus relations, especially in defense and security cooperation; prospects for the resumption of settlement talks, and the human rights issue of Missing Cypriots.

During the visit, the AHEPA Family delegation met with: President Nicos Anastasiades, U.S. Ambassador Judith Garber, and Presidential Commissioner for Humanitarian Affairs and Overseas Cypriots Photis Photiou, who also hosted the delegation for a luncheon.  In addition, the delegation met with His Beatitude Chrysostomos II, Archbishop of Cyprus.  Further, the delegation enjoyed dinner with Lt. General Ilias Leontaris, chief of the Cypriot National Guard General Staff, who organized a wreath-laying ceremony at The Tomb of Makedonitissa, a military cemetery and war memorial.

“We sincerely appreciated the generous amount of time afforded to our delegation by Cypriot and American government officials and thank them for their hospitality,” Loucas said. “Our visit to Cyprus was timely, and we gleaned a lot from our meetings about the current state of affairs on Cyprus and in the eastern Mediterranean.”

The visit to Cyprus concluded with an AHEPA Charity Gala held at the Presidential Palace, May. 7.  There, in the presence of President Anastasiades, Supreme President Loucas and Chairman of the Board Nicholas A. Karacostas, PSP, presented the 2019 AHEPA Socrates Award to Philip Christopher for his fulfillment of the American Dream, for his vision, passion and determination to see peace, love and justice prevail and reign over a united Cyprus, and for his unwavering support for Hellenism and organizations such as AHEPA. The Socrates Award is the highest award the Order bestows.

“Philip’s relentless passion to see justice for Cyprus is immeasurable,” Executive Director Basil N. Mossaidis said. “He inspires those individuals who also make it their worthy mission to seek justice and peace for Cyprus.  As an advocate, Philip has set the benchmark to which all others aspire.”

He added, “We also are proud to call him a Brother Ahepan.  Not just for his advocacy.  Philip Christopher embodies and exemplifies why AHEPA was founded nearly 100 years ago.  He immigrated to the United States at the age of 10.  Through a hard work ethic, and spirit of entrepreneurship, Philip ascended over a 30-year career to become a leader in the wireless industry—as President/CEO and Founder of American Network Solutions and serving on several trade association boards.”

In remarks, Supreme President Loucas commended the Republic of Cyprus for its integral role in the trilateral partnership with Greece and Israel and for its demonstrated commitment to enhance defense and security cooperation with the United States.

“The Republic of Cyprus stands at the forefront of a promising dynamic in the Eastern Mediterranean,” Loucas said. “As it always has, AHEPA stands with Cyprus during these exciting, yet often threatening times.”

The Charity Gala raised funds for the Cyprus Institute of Neurology and Genetics and in memory of Photos Photiades.

The delegation departs Cyprus for Athens, Greece, for three days of meetings and events.  From there, it will proceed to the Ecumenical Patriarchate and conclude in Thessaloniki. AHEPA has organized overseas excursions since 1928.