Sanction Turkey! Stand Up and Fight! 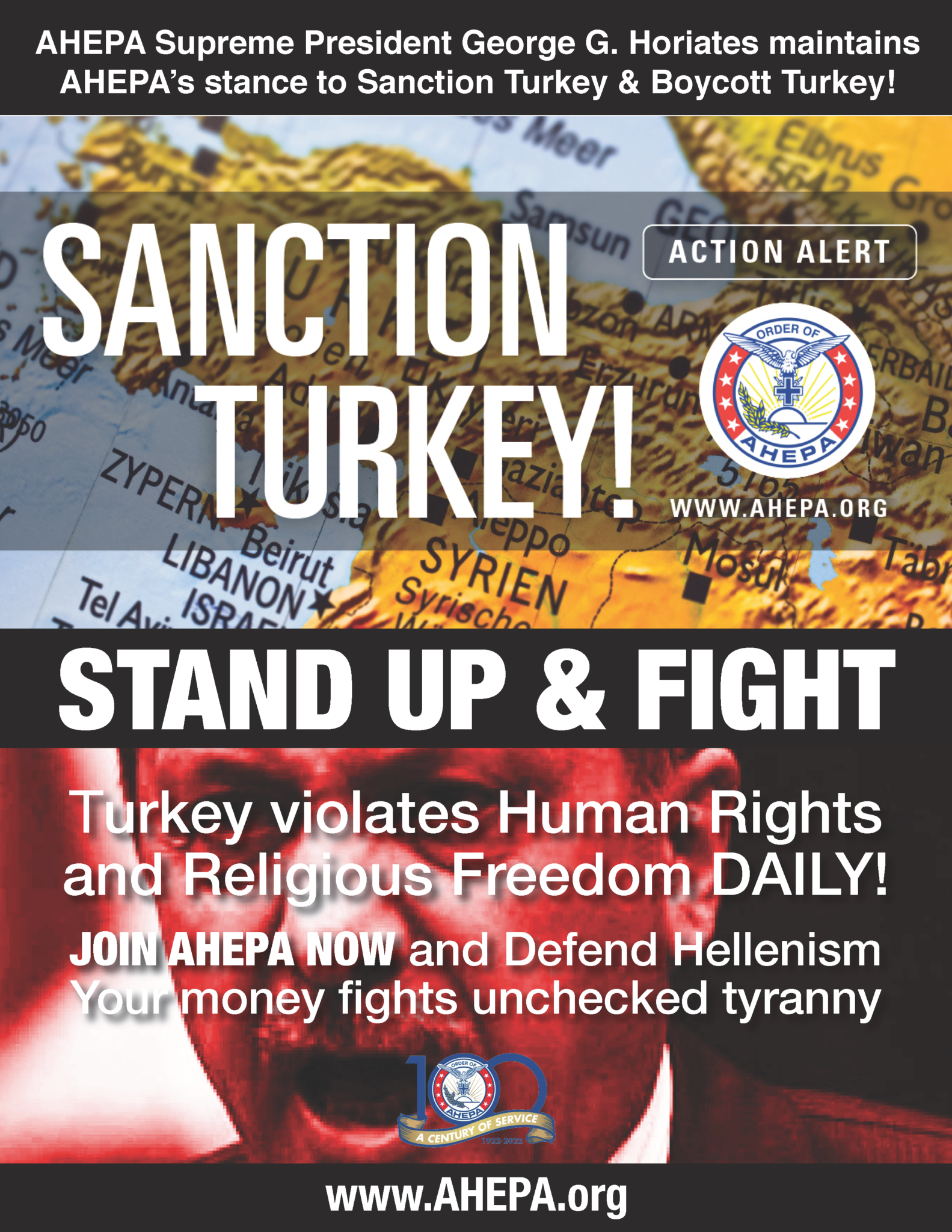 From the desk of Supreme President George G. Horiates

In Wake of Hagia Sophia’s Status Change, A Need for Action. Let’s Start with a Boycott Turkish President Recep Tayyip Erdogan is anything but a president. He is a tyrant. The Erdogan regime has jailed the most journalists, purged judges and academics, provided a safe haven for terrorist organizations such as Hamas, and has suppressed freedom for religious minorities. Under the regime, the Aegean and Eastern Med have become a tinderbox due to Turkey’s blatant, illegal hostilities, which are dangerous and unnecessarily place lives in harm’s way. The eradication of Turkey’s religious and cultural heritage, especially Christian and Hellenic, is alarming, disgusting, and has escalated with the demise of secular Turkish society and consolidation of Erdogan’s power. Hagia Sophia is the latest victim of his tyranny. It is hurtful to see one of the greatest monuments of Christian heritage used as a political ploy in what can only be described as a banana republicstyle decision to convert Hagia Sophia to a mosque. Hagia Sophia is a gift to all humankind. Its value is universal—a UNESCO World Heritage Site. It is a symbol of wisdom, hope, peace, and plurality. It is an architectural marvel and an inspiration to the eyes of art historians and engineers. Archaeologists, journalists and academics all appreciate it. All visitors are awed by it. To the Orthodox Christian Faithful, all other Christian denominations and pilgrims, it will always be the center of the Orthodox Christian world—a glorious monument to the Christian Faith. It pains Christians that the possibility of visiting Hagia Sophia is unknown and the fate of its beautiful mosaics—and the Christian and Byzantine values, heritage, and traditions that are inscribed with it—is uncertain. At best, they will be covered-up, and at worst, destroyed. As a State Party to the World Heritage Convention, Turkey is expected to protect the World Heritage values of the properties inscribed and is encouraged to report periodically on their condition. Today, this commitment seems to be compromised deeply. Kemal Mustafa Ataturk, the father of modern-day Turkey, decreed Hagia Sophia a museum in 1934, realizing Hagia Sophia’s importance to Christians and its universal value as a symbol of
tolerance and peace. In essence, Erdogan has poked his finger in the eye of the once revered and sacrosanct founder of Turkey. Erdogan’s action has evoked statements of disapproval from UNESCO, the World Council of Churches, the United States Commission on International Religious Freedom, Pope Francis, and government officials from around the world. Meanwhile, there is a reason why Hamas and the Muslim Brotherhood each lauded his decision. The community is filled with a range of emotions, from outrage and anger, to frustration and sadness, to disbelief. There’s a feeling of helplessness. What can we do? Although the following thoughts are not silver bullet solutions for the reversal of Erdogan’s decision, it would apply pressure to the Erdogan regime in other ways to send a strong message where it hurts—his already ailing economy.

— This trend must stop. Among Turkey’s top imports to the United States: carpets and other textile coverings ($591 million).2 In fact, Turkey is the top exporter worldwide of hand-woven rugs at $1.92 billion, according to the Observatory of Economic Complexity (OEC).3 Therefore, a global Hellenic diaspora can play a role. For textiles, check your house linens and non-knit men’s and women’s suits. However, it is with agricultural products where we in the United States can make a difference. In 2018, U.S. total imports of agricultural products from Turkey totaled $1 billion.4
Leading categories include: processed fruit & vegetables ($191 million), tobacco ($173
million), snack foods ($121 million), other vegetable oils ($116 million), and fruit &
vegetable juices ($89 million).5
–Turkey produces two main types of oranges, the Washington Navel (75% of total crop)
and the Valencia (20%).6
–Animal products ($46.2 million) include: non-fillet fresh fish, honey, and cheese.7
So, please check those product and textile labels to ensure you are not buying Turkish products that support the Erdogan regime.
Hit Turkey in tourism and travel as best as possible. Do not fly Turkish Airlines, the regime’s
national airline. Period. Michael Cohen, a resident scholar at the American Enterprise Institute
and a former Pentagon official, suggested the EU and U.S. to consider denying Turkish Air
landing rights in a 2019 op-ed in The Washington Examiner over Turkish aggression in the
eastern Mediterranean.8
This suggestion merits our community’s strong support.
Press for the Senate to Sanction Turkey.
We remind the community the U.S. House of Representatives has passed legislation (H.R.4695)
that imposes sanctions on Turkey for its military invasion of northern Syria and that a companion
1 https://ustr.gov/countries-regions/europe-middle-east/europe/turkey
2 https://ustr.gov/countries-regions/europe-middle-east/europe/turkey
3 https://oec.world/en/profile/hs92/115702
4 https://ustr.gov/countries-regions/europe-middle-east/europe/turkey
5
Ibid.
6 https://commodity.com/turkey/
7 https://oec.world/en/profile/bilateral-country/usa/partner/tur
8 https://www.washingtonexaminer.com/opinion/cut-turkish-airlines-off-from-europe-rather-than-be-complicit-in-theft

AMERICAN HELLENIC EDUCATIONAL PROGRESSIVE ASSOCIATION bill in the U.S. Senate (S.2641) is positioned to be brought to the Senate floor, should Majority Leader Mitch McConnell decide to do so. Ask your U.S. Senators to call on Majority Leader McConnell to have the Senate take immediate action to sanction Turkey. Please visit www.ahepa.org/sanction-turkey for more information.
The Trump Administration also has the ability to hold Turkey accountable for its acquisition of the Russian-made S-400 missile defense system by imposing sanctions on Turkish entities and individuals under the Countering America’s Adversaries Through Sanctions Act (CAATSA) for Turkey’s acquisition of the S-400s, just as the Administration justly did with Chinese entities in 2018. Other avenues to pursue. AHEPA will explore opportunities to rally the community, and bring all peoples together, at venues and sites to raise awareness to key audiences that Erdogan’s action is unacceptable to a variety of communities, organizations, and sectors, and it cannot be allowed to stand. AHEPA is committed to defending Hellenism and to exploring all avenues for legal recourses to address Erdogan’s decision to covert Hagia Sophia into a mosque. No one can erase the truth, erase and exterminate Christianity, and wipe out the Hellenization of the Byzantine Empire.

Hagia Sophia’s conversion into a mosque is proof that Erdogan is not only guilty as a reckless, tyrannical leader, but an evil doer. Even if his action does not land in a court of law, Erdogan is guilty as charged.