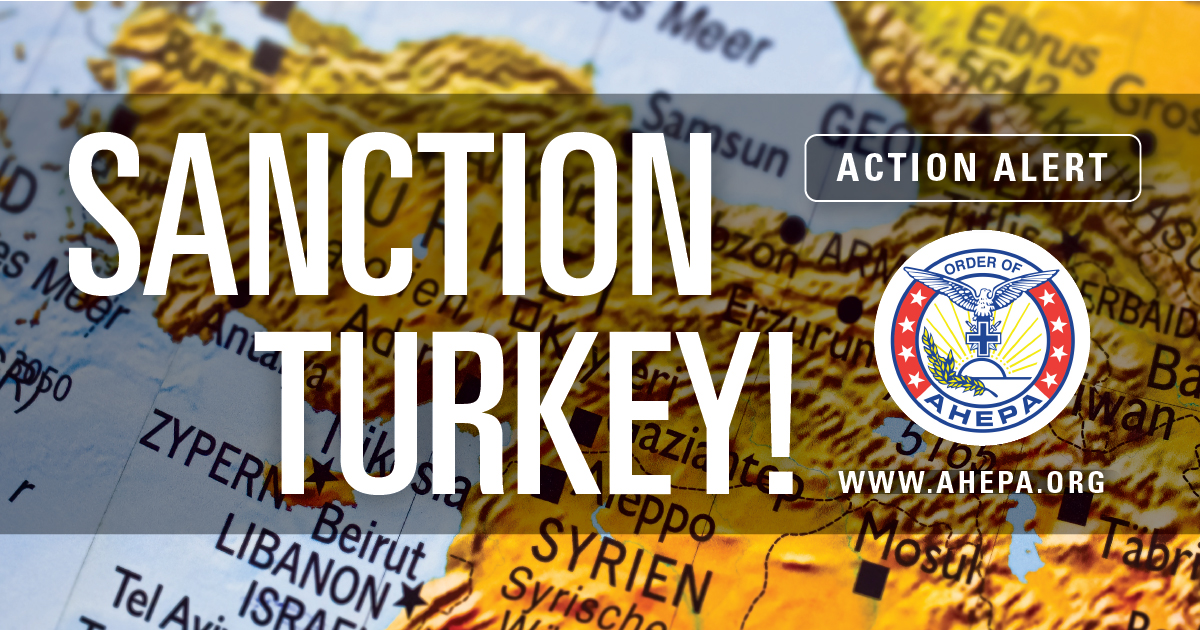 The U.S. must impose strong sanctions on Turkey.

The U.S. must affirm a fact of history.

Hold Turkey responsible. The House acted. Now the Senate must.

1. Tell your U.S. Senators to support legislation that places strong sanctions on Turkey by encouraging Majority Leader Mitch McConnell to bring it to the floor:

As a constituent, I urge you to call on Senate Majority Leader Mitch McConnell to have the Senate take immediate action to sanction Turkey.

Turkey must be held liable for its invasion of northeast Syria, which is a violation of international law. Turkey attacked U.S.-allied Kurds who fought against ISIS, caused civilian casualties, and endangered U.S. military personnel. It worsened a humanitarian and refugee crisis and fueled increased regional tension and instability, including instigating a migration crisis on the Greek-Turkish border. In the Eastern Mediterranean, Turkey conducts illegal drilling activities, signs illegal maritime agreements, and practices gunboat diplomacy.

As a first step, I urge you to co-sponsor, if you have not already, S.2641, Promoting American National Security and Preventing the Resurgence of ISIS Act of 2019, sponsored by Senate Foreign Relations Chairman Jim Risch and Ranking Member Robert Menendez. Equally important, please reach out to Majority Leader McConnell and urge a floor vote on the bill.

Please support this vitally important legislation that upholds American values and security interests.  Thank you for your consideration.

✅ S.Res.150, Expressing the sense of the Senate that it is the policy of the United States to commemorate the Armenian Genocide through official recognition and remembrance. (see co-sponsors)

From October 7 Statement: AHEPA Outraged as the West Continues to Turn a Blind Eye to Turkey

“We urge Washington and Brussels to act now. We reiterate our call for targeted, swift and overwhelming sanctions to be placed on Turkey, specific to illegal actions Turkey has taken in the exclusive economic zone of Cyprus. We welcome the bipartisan call for sanctions should Turkey conduct military operations in Northeast Syria against the Kurds. Additionally, NATO partners must scrutinize Turkey’s place in the Alliance. Further, Congress must hold hearings on Turkey’s threats to peace and security in the Eastern Mediterranean and Middle East, including its ties to terrorist organizations, based on these recent developments.”