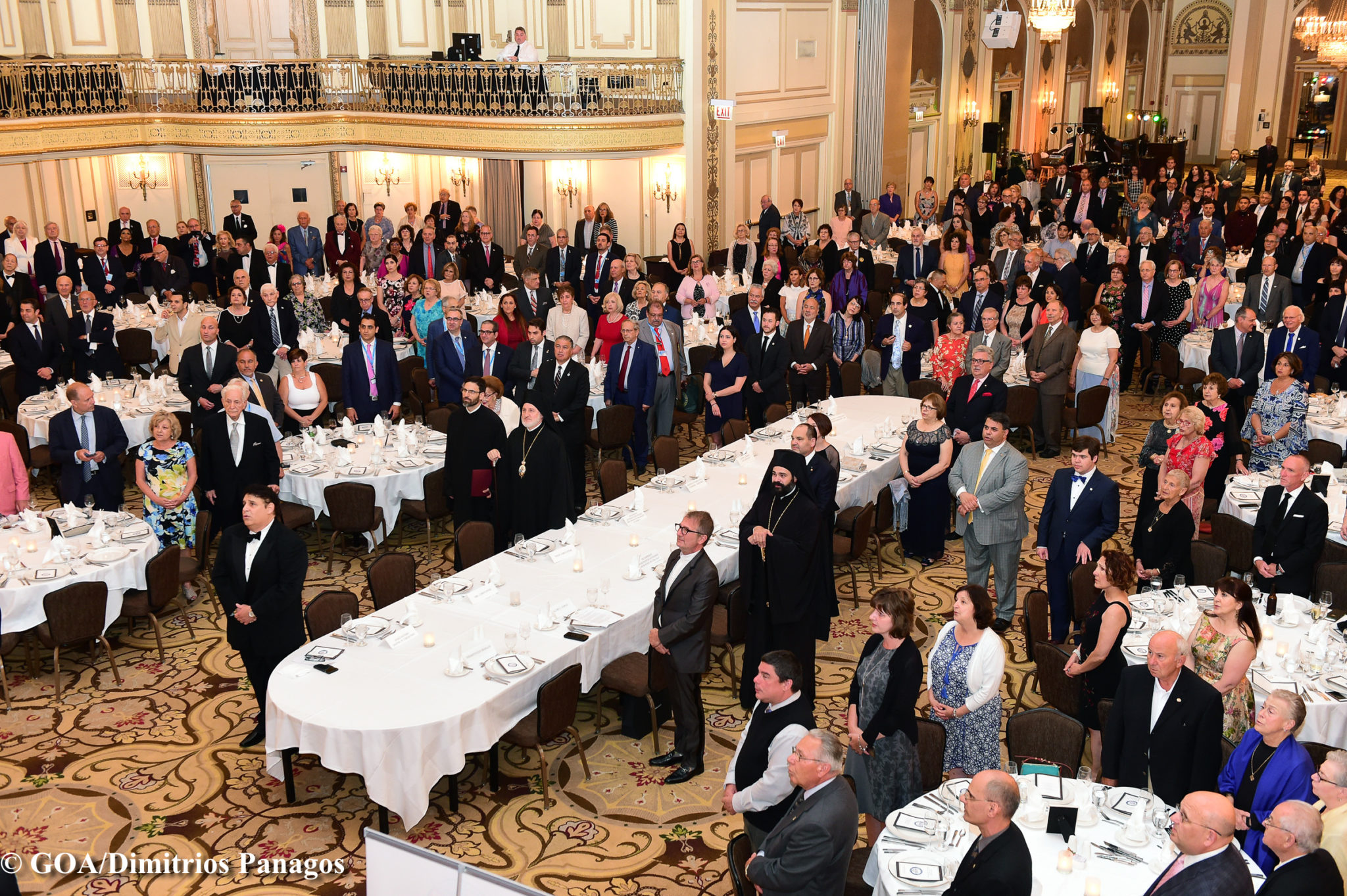 CHICAGO — The American Hellenic Educational Progressive Association (Order of AHEPA), the leading membership-based service association for the nation’s millions American citizens of Greek heritage and Philhellenes, hosted its 97th Grand Banquet, the pinnacle event of the annual Supreme Convention, July 5, 2019 Palmer House Hilton, Chicago.  The Grand Banquet serves to honor excellence in the community and salutes dedication and service to the Order.

Two prominent Ahepans were honored with the highest award AHEPA bestows as Michael Psaros, co-founder and managing partner of KPS Capital Partners, LP, and Philip Christopher, president/CEO and founder of American Network Solutions, each were presented the AHEPA Socrates Award.  AHEPA initially presented Christopher with the award during a gala held at the Presidential Palace in Nicosia, Cyprus, in May (see news release).

Each of the Socrates Award recipients were recognized for their fulfillment of the American Dream and for their unwavering support for Hellenism and Orthodoxy.

“I am proud to be an Ahepan because of its service to others and to the world,” Psaros said in acceptance. “AHEPA is a selfless organization and the impact of AHEPA’s philanthropia over decades in our collective community is extraordinary.”

Christopher, a champion of the quest to see peace, love and just prevail and reign over a unified Cyprus, also conveyed his pride in being an Ahepan.

“I have been a proud member of AHEPA for many years and always recognized the dedication and commitment of the organization to Greece, Cyprus, and Hellenism,” he said.

Another prominent Ahepan, Publisher and Philanthropist Gregory Pappas, received the 2019 Academy of Achievement Award in Hellenism.  Pappas is the founder of the news/blog site, The Pappas Post, and the Greek America Foundation.  Past Supreme President Ike Gulas introduced Pappas.

In his first appearance before the AHEPA family, His Eminence Archbishop Elpidophoros of America delivered the Keynote Address.

“My heart is filled with joy to address you on this wonderful event of the Grand Banquet of the AHEPA Supreme Convention,” His Eminence said. “This is a blessed opportunity for fellowship in the bonds that we share through our faith, our legacy, and our service. It is also an opportunity to affirm the great potential we have before us.”

In his address, Archbishop Elpidophoros spoke about the anticipation of celebrating the centennial anniversaries of the Greek Orthodox Archdiocese of America and AHEPA “in this nation of freedom and hope.”

“As we prepare for these commemorations, we share great joy in knowing that the Holy Archdiocese of America and the AHEPA family have worked together and shared this legacy. Over the past century, the members of AHEPA have supported the sacred ministry of the Church through the establishment and growth of our parishes, through the support and leadership offered in our national programs and initiatives, and through the unwavering support for our beloved Mother Church, the Ecumenical Patriarchate. The Church has continued to recognize in love and gratitude the vital work of AHEPA in education, philanthropy, civic responsibility and in so many other areas of service, as well as in advancing Hellenic ideals which inspire and enliven our common humanity and enhance our witness of our Orthodox faith. My hope and prayer is that this relationship will not only continue in the love that we share and that it will bear much fruit, but that it will also become even stronger as we prepare and commit for the work that is before us.”

His Eminence also conveyed greetings and blessings from His All-Holiness Ecumenical Patriarch Bartholomew.

Finally, the program included a visit from Mickey Mouse, and a greeting from Dessie Dulakis, who invited the AHEPA family to Walt Disney World Resort for the 2020 Supreme Convention!